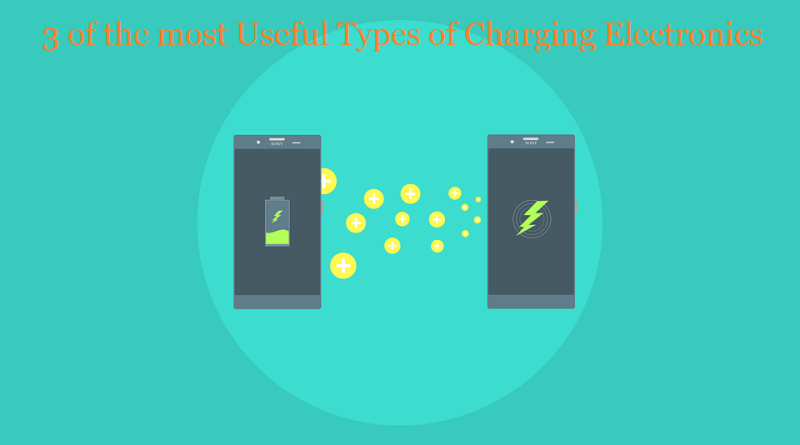 Charging has become something that is vital to our lives and the main reason for that is because we have lots of devices that require recharging. As important as charging is, most people don’t know what charging methods are available and what types of traits to look for when it comes to charging electronics. That can be a bad thing because there are solutions for charging electronics that are becoming quite innovative and useful to use.
In this article, I’ll be going over the most useful types of charging electronics so you can make the most out of your charging lifestyle.

Power banks are the fastest growing type of charging electronic and the main reason for that s because they’re portable chargers. Most of us use USB wall chargers to charge our devices, as they’re easy to use, have lots of charging ports and most of them have fast charging. With that said, the worst flaw with USB chargers is that you’re limited by charging cable and your device can’t go anywhere until it’s charged to a good point.

Power banks that have low power capacities are ones that are used the most often and the reason for that is because they’re small and lightweight. The power capacity of a power bank and its size/weight are correlated. These Mini power banks are so small that they’re able to fit into a pocket or you can hold most of them as you charge and use your smartphone. With all that said, most Mini power banks are really only able to charge most smartphones once and most of them have a single charging port.

Then on a higher level, there are power banks that have high power capacities and those types aren’t used nearly as much as Mini power banks. The main reason behind that is because of their higher power capacities that make these power banks large and heavy. So large that they won’t be fitting into your pocket and heavy enough that you won’t want to hold them. For what they lack with their portability, these high capacity power banks are ones that are able to charge devices like smartphones and tablets to their full power numerous times before they’re fully depleted of their power.

In addition to a high power capacity, they also have multiple charging ports that you allow you to charge lots of devices at once. Just be sure to know the charging speed of each of the ports on a power bank before purchasing; because you don’t want slow charging along with your portable charger.

This is such a great innovation for charging because most people use USB wall chargers with their Surge Protectors. That can be a problem for two main reasons. Reason #1 is that you’re using a USB charger with an Outlet on the Surge Protector that could have been used for something else. Then there’s the risk that the USB charger that you use with a Surge Protector is going to cover the surrounding AC outlets once you plug it in; therefore you have useless AC Outlets.

The most useful type of energy is a never ending one and in this case, it’s a Solar Charger. Solar chargers are among the most useful charging electronic because you’re using the Sun or any strong enough light source to charge your device. Just to make it clear. Solar chargers and Solar power banks are not the same things. Solar power banks are just like any other power, but they have a single Solar panel that is able to recharge the power bank at a very slow rate.

Solar chargers don’t have a power source, instead, a Solar charger has multiple large Solar panels that take in and transfer light energy into charging power directly to your device. Those that are in the outdoors a lot are going to find Solar Chargers the most useful for when they’re going camping or hiking because that’s where you can make the most out of this type of charger.
These types of chargers are also quite portable, as they have lanyard holes that are able to attach to backpacks, have the Solar panels facing out and that way a Solar charger can harness as much energy as possible while you’re on the move.

Author Bio:
My name is Usman Haq. I’m the creator and own of ChargerHarbor.com. It’s a website that’s dedicated to providing reviews, tips, and news about all things charging electronics related. My interest in tech has led me to share my knowledge.